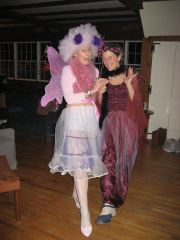 Me in pink as Chastity May

Do you have an event that would be enhanced by a performance? I perform as a poet reading my own poems, as a storyteller performing personal and commissioned pieces, and in my one woman show, “Suddenly Single.”  I weave poetry, anecdote and story in spirited portrayals of characters and situations from everyday life; people laugh, they cry and are moved recognizing themselves and glimpses of their own lives in my work. “Her style ranges from the theatrical to the intimate and humorous.”
—Silvermine Guild Arts Center, CT.

My stories combine poetry and prose and often improvisational acting. I am told that my poems often serve as mirrors in which people see themselves reflected.

I have performed extensively in the US, UK, Ireland, and Europe, in venues as diverse as universities and bookshops, Boston City Hall, and the King’s Head Theatre and The Southbank Centre in London. I have appeared in Australia and will present at the International Conference on Thinking in New Zealand in January of 2013. (See Appearances.)

I am available for:

Comments on my performances: 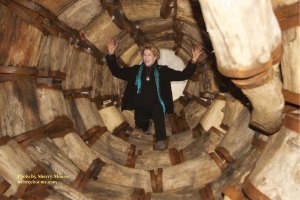 inside a sculpture by Jamie Burnes
photo by Sherry Moore

“Carol Burnes performs poetry the way Madonna would perform Mass…(she) cares about reaching her audiences, and  has developed a performance formula which bridges the gap…her performances accomplish something closer to dialogue with an audience.”
—What’s On, London Entertainment Magazine

“Her performances are an unorthodox mix… Kids, Cats – and the outrageous!”
—Poetry Ireland, Dublin

“Carol Burnes is bound to wake you up!”
—The Tab, Boston